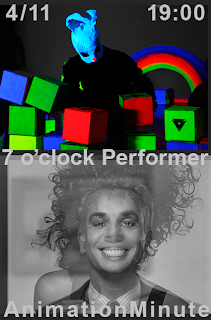 7 o’clock Performer på DeSkråBrædder:
kl 19:00 – MATHIAS KRYGER – The Fire Inside
– Vocal attempts at something biographical (Part of the project The Year of the Whitney Houston 2010/2011) – a performance in two parts
– Part One: Breeeeathe in, breeeethe out, relax your vocal chords, release, lengthen your spine, broaden the rib cage, activate the diaphragm say after me: Aaaahhh. With opera singer Marie Grove Jørgensen.
– Part Two: Troughout all the madness and the hype and the peaks and the cooldowns, I’ve retained my basic values. Getting married and having children. That old stuff, that old stuff, that old stuff. And you, and you and you and you. ‘Cause didn’t we allmost have it all? All that, and that and that. You and you and you.

kl 19:30 – Chez Debs / KAREN LAMBÆK & DEBORAH VLAEYMANS
Chez Debs is something in between a concert, an electro-party, a rehearsal, as well as a live art installation. Abundance, sweets, tarrantella and grotesque humour is taking the visitors on an apocalyptic journey into a stylised collage of iconoclastic metaphors, a luminous world with two-dimensional characters simulating a distorted dream about the perfect life. Chez Debs er støttet af Tuborgfondet og Kunstrådets Scenekunstudvalg. – Bemærk: hav varmt tøj på.